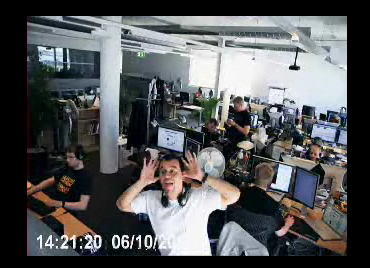 CCP just released a time lapse video of what it looks like inside the QA Department when a patch is released. In this case the patch was Empyrean Age.

The video is available on the Facebook EVE Online group. If you're on Facebook, the you've got to join that group. If you're not, then hurry-up and register like the rest of the 90 million of us, and join the EVE group - and while you're at it, there's also an EON group you'll need to join!

P.S.: Can anyone tell me who the dude with the white t-shirt is?

I joined! One more step on the way to associating my real name with my gaming handles, something I'm still not sure I'm prepared to do. I know the dots are out there to connect, but I'm not sure I can help that at this point.

How did you handle it?

cowboy, just keep the guns loaded and be prepared to shoot the stalkers. That's how *I* handle it. :)

CK: Cool video. I thought I was in that group already but apparently not. Am now. Sure must be nice to be able to play EVE for a job!

@Drugstore Space Cowboy - We watchin' ya boy! Seriously mate, I gave up on the anonymity thing a long time ago. Though at first I was a bit anxious about it, over the years, I've managed to just go with it.

@Mynxee - I love being able to dig these little news bits. Make my day when someone says they weren't aware of this or that. Glad you enjoyed!

Its really an adventurous game.