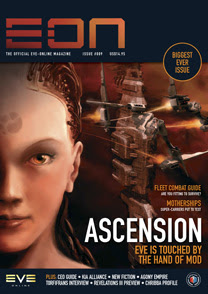 A new issue of EON is on it's way! And this one will be the biggest ever; 84 beautiful pages! Here's a brief overview of what to look for:

EVE: ASCENSION
Anyone who has played one of the Homeworld games will remember its epic fleet battles, with hundreds of fighters, corvettes and battleships trading laser fire across the billowing folds of deep space. Well now, thanks to the efforts of a small team of coders and artists, the massive EVE universe is being condensed, blended and trimmed to fit the mechanics of one of the best real-time strategy games ever made. EVE: Ascension will be the result of EVE and Homeworld's coming together, and we chat with the project leader about the stresses, strains and ambitions behind EVE's biggest fan project


NEW FICTION
More pages in this issue means we've been able to squeeze in more fiction than ever before - three epic stories on the dangers of terraforming ("Green Dreams"), gate maintenance ("Just Another Traffic Advisory" - yes, it's hard work keeping those highways open) and having ideas above your station ("The New Damage")


INSIDER GUIDES
Two massive guides, one on how to lead your corporations and alliances, the other detailing the duties and responsibilities one must have in mind when on fleet operations. So whether you lead from the front, or attack from the rear, there should be something in this issue for you ;)


TOURNAMENT RECAP
E-ON#009 has unofficially been dubbed 'The Verone Issue', as not only did the Veto leader pen a guide to being an effective CEO (above), but also helped out with a look back on all the group stages of the recent Alliance Tournament, which if you missed, you can catch up with here.


Looking forward to it. If it was to arrive before Fan Fest it would be even better since at least I could console myself reading through it.
- October 22, 2007

Glad to hear it's a good one. Looking forward to flip through it!

It's a good read and the wall planner will be useful. Best bit for me are the stories and I loved the article on the Homeworld Mod. Very nice.

I'm hoping it'll be waiting for me when I get back from Atlanta!