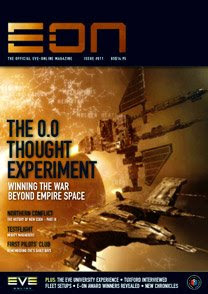 This latest issue is probably the best issue so far. And I'm not saying that because my name (p10) and blog (p77) both appear in this issue. This wouldn't be the first time.

My relationship with EON goes back a long time. Some may remember that I had a picture of me and my better-half in issue #003. Once you've stopped starring at Lacy and Melissa, you'll notice me on in the bottom middle photo. Big smile, dark blue shirt next to the cute brunette in a turquoise top (my wife), yep that's me! That was back in 2006 at the Las Vegas Player Gathering.

Anyways, back to why I think this is the best issue so far. I say so because of the quality of the articles, news and chronicles. Now I haven't gone through the whole issue, but with what I read so far, I really look forward to the next issues.

In our digital day and age, where important gaming events come-up weekly, if not daily, EON still manages to get me excited about upcoming events (Fan Fest 2008), guides (Insider's Guide series) and upcoming products (EVE novel, EON Special Issue). And before I forget, anyone who's ever read an issue of EON, please take the time to complete the EON Survey that Zapatero has put up. It's time well invested in the future of this precious publication.

As always, this latest issue is a must for dedicated EVE players. I strongly suggest that you order it or better yet, subscribe!
- April 23, 2008

Glad you liked it. A few annoying mistakes crept into this one, but the guys back at EON HQ were silly busy at the time.

I agreed totally CK! I have had my issue at my desk....haha and Richie will confirm that he autographed number 10 for me :) Anyways, keep up the good work man, site looks great!

@Zapatero - I did notice a few, but who keeps counts! Better eh? Wonder what you mean...

@Manasi - Autographed! Shoot, should have brought my 10 issues when I met him in London!

I think he thought I was some big creepy stalker...but yes none the less he autographed it.