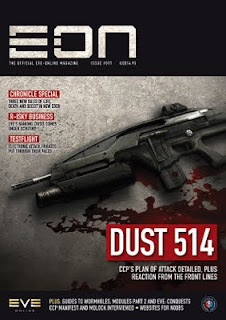 In this day and age of the InterTubes, it's nice to walk away from the digital world, find a nice quiet spot in the house, sit down on a comfy couch with a nice alcoholic beverage (say a Taylor Fladgate port or a Grand Marnier) and start reading a high quality, visually stunning & intelligently edited magazine such as EON.
You may think that I'm stretching the truth here, just for the sake of you the reader, but the opposite is actually the case. EON has become an integral part of my EVE experience. And these days, with the sort of schedule that I have, it's a real treat roam through its A4-sized pages.
This latest issue - "EON #017 DUST 514" - is no exception to the rule. And with the lead article on the new and upcoming EVE console first-person shooter, how could it not be interesting!
IN DUST WE TRUST
For console gamers DUST 514 promises to be the most unique shooter ever
devised, but for those of us already fighting between planets what will it
mean to have hundreds of thousands, perhaps millions, fighting on the
ground? A crack squad of E-ON special forces capture CCP to find out how the
EVE FPS will fuse with EVE Online, plus we get the views of players to see
if they are as excited about DUST 514 as they should be.
THREE CHRONICLES
Officially, the early days of Amarrian expansion were a time of glory for
New Eden's largest empire, while today the worlds within the factional
warzones are seen as frontiers that will one day reward the brave pioneers
that have tried to tame them. The problem with official versions of events
past and present is that they are very often wrong, as evidenced by three
new chronicles in this issue of E-ON, which show a very different side to
life on the frontiers of New Eden.
TRUST FUNDS
Players have never been as rich as they are currently, yet the status of
banks in the New Eden economy has never looked bleaker after a string of
high-profile trust issues that have left the industry in tatters. Player
economist and blogger LaVista Vista delves into the history of banking in
EVE to see if it has a future and what it might look like.
PLUS
Table of Content - EON 017
Order yours now!
- November 19, 2009

Interestingly I ordered a years' subscription and this back issue only yesterday. It's been on my "to do" list for a while but the pricing's fairly steep but I finally managed to convince myself...hope it's worth it!

So, this is how you get your free subscription every year? You promote their magazine and don't disclose your compensation for the ad?

http://disclosurepolicy.org, you should read it. You are such a marketing tool!

More wasted pixels. What a shame!