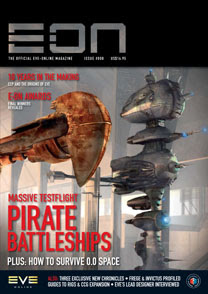 Here's a sneak peak at the next issue of EON, which is shipping on July 7th. As always, I'm excited about this next issue. One thing though that I've had in mind for a number of month now, is to write something up for the next issue. And I keep pushing it to the next one. And the next.

I do have got a couple of ideas for articles, but I really have to put myself to it, get some discipline and start working on them instead of just letting go of the thought. Which brings me to ask you this: have you ever thought of writing for a gaming magazine? As amateurs, we're always afraid to take the plunge, anyways I am. But I think this time, I will.

If you were to write an article for EON, what would write about? A short story, an article on PVP tactics, or on the political aspects of the corporate and alliance life? I'm curious to know. I think we all are.

PIRATE FACTION BATTLESHIPS
E-ON has featured Testflight since the very first issue, but with Faction ships becoming evermore popular, and more affordable, it seemed the right time to get our ship expert, Farjung, to go into the ins and outs of fitting and using each of the five Pirate Faction Battleships. Until Tech II Battleships arrive, and even after, these ships are seen very much as EVE's high-performance muscle cars, and whilst that fact would hardly be likely to impress a potential mate, the ships are imposing enough to impress a potential enemy.

E-ON AWARDS WINNERS
The ceremony didn't quite go to plan, but that hasn't stopped the voting in E-ON's first EVE player awards. We've tallied up the votes (or, rather, a computer did) and inside we announce who the winners are and who will be receiving a specially designed laser-etched award, of which only a few will ever be made. Read who you voted for as the Alliance of the Year, who is the best CEO, writer and ultimately, who has been crowned EVE Idol. No acceptance speeches, sadly, that will have to wait for a future edition of EVE TV


INSIDER GUIDES
As well as part 4 of our guide to The Second Genesis CCG, Nyphur follows up his previous guide to Rigs with an in-depth look at finding the raw materials required to make them. And if that hasn't got you salivating, how about Ifni's guide to living in the evil realms of 0.0, with its relentless pirates, mired politics and deserts of empty space just waiting to be claimed.


HAPPY BIRTHDAY CCP!
Having recently turned 10 years young, we go back to the dawn of EVE to find out how it was during EVE's big bang, the grand ideas, what the development process was like, all the way to the game's first release in 2003.

Just got my copy in the mail and it's very nice, as always ;). I also enjoy the ads in the mag. They're very well done (well at least most of em).

Well then, there's a good chance that I may have got a copy waiting at home right now.