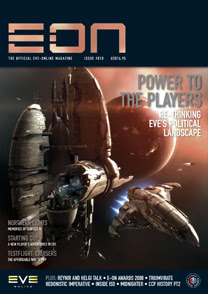 With the 1oth issue of EON, MMMPublishing have managed to out do themselves! I got the issue a while back, but only picked it up to start reading over the week-end. And boy is this one loaded with the good stuff. This issues has articles on the Fanfest 2007 (thanks to fellow Canuck Winterblink), CCP history, PVP cruisers and a ton of others!

And then there's the EVE Fanfest 2007 DVD (with printable jewel covers here and here). A godsend at the very least. If any of you out there weren't convinced that this event is the EVE geek version of paradise, then nothing will. I'm now counting the days until CCP announces the next one, and booking hotel and flight as soon as word get out. I can't wait!!

So, without further ado, here is the table of content of this latest issue. Mark your calendars boys and girls, the next one comes out in April, and will have updates on Ambulation, which should be arriving sometime before Xmas.