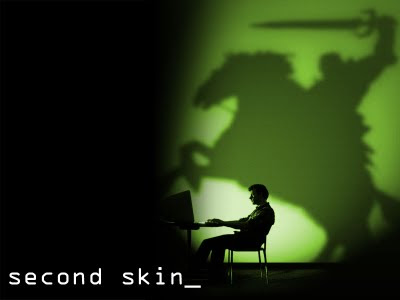 I've been playing table top games, RPGs, or video games long enough to remember a time when we were looked down upon. As with video games today, back when I was teenager, Role Playing Games were being blamed for suicides and other evils. We, who enjoyed these games, were looked at as freaks and made fun of. But over time more and more kids, teenagers and young adults started playing these RPGs and the negative vibe eventually went the way of the dodo.
Fast forward 25 years and we find ourselves, as (video) gamers in general, and MMORPG players in particular, in a similar situation. Actually, that not totally true. Over the last 2 to 3 years I've noticed a change in mass media's perception of gamers. A change for the positive. The nerds of the past have evolved into today's geeks (well some of us have anyways :p). With the advent of World of Warcraft, the term MMORPG has become much more mainstream recently. MMO players are less and less seen as antisocial-zombies living in virtual worlds as they escape the Real World. Studies are starting to come out which offer a positive image of gaming. MMORPG players are being seen as developping leadership skills due to the multiplayers colaborative nature of MMOs.
But then comes along a documentary like Second Skin. Premiered in March 2008, it follows World of Warcraft and Everquest players as their virtual lives clash with their real life obligations. But there's one big problem with the film. Now, don't get me wrong, the documentary is well made, the flow is just right and you can definitely see that the folks behind it are very talented. That's not where the problems lies. Let me explain.
For the pleasure of my US readers, here is the embedded video

Earlier this week, I had the chance to see the documentary before its released on the web earlier today. As I started watching I was excited about the prospect of seeing how we, as MMORPG players, would be portrayed. I had my hopes up that it would show how these games have brought millions of people together from all over the world. How they have allowed us to learn new skills (writing, blogging, podcasting, leading, etc.) and discover hidden talents we did not know we had. Or how a 16 year-old could successfully lead a guild or corporation of over 50 people (from all walks of life, social background or professional careers) to accomplish difficult goals. But my hopes quickly came crashing down.
What the folks behind Second Skin did though is focused on the "weird" behaviors of some MMO players. I'm not saying that everyone in the film is a weirdo, but what I am saying is that that's where the filmmakers decided to focus on. As I was watching the film, I couldn't help but tell myself that these were not the kind of folks I played with. These were not the types of people I had come to know over the last 5 years of playing EVE Online. And I don't think it's a "Well-this-is-how-WoW-players-are" kind of thing. I'm totally aware that a lot of MMO players have addictive-like behaviors when it comes to playing these games.
I just don't buy the idea that we're all like that. Never have, never will. It wasn't true for RPGs a quarter of a century ago, and it's still not true today for MMO players. It's as if you did a movie on religion, but only focused on the fundamentalist. Or a movie on wine making, but only focused on alcoholics. I don't feel that the movie does a good job at presenting a fair and realistic view of the MMO Gaming community.
I'd really be curious to know you're thoughts as well, but in my case this wasn't the MMO documentary I was hoping to see. Not by far.
I'm still waiting for that one.
- August 07, 2009

good lord gamers are obese.
TBF I used to be obese myself but not as bad as some of the players in that video...get out and enjoy RL and activity sometimes, then play MMOs
/rant over

I agree with you CK. Having played WoW (cringe) in the past, I did run into a few people who are like this with games. But honestly it's such a small percentage of the entire MMORPG community. But I can see why they chose to focus on these people more than others, because it makes for a more entertaining documentary. It's just a really bad depiction of the MMORPG gaming community.

I remember postal ordering those 1st D&D booklets as a young teenager.

It's sad that they decided to go the negative rout, and stigmatize MMO playing.

As if the real world, especially the US economy and working-class slave job market offers any kind of deep satisfaction to living...

Something really is irking when a heavy stigmatization is created under the guise of "normalcy" or the very powerful documentary media we have today.

People will be misled by Second Skin and will think very much the MMO players are all wierdos.

In fact probably the opposite is true, it is probably far more healthy to escape the sickness we have for a culture, that feeds off of poverty and slave wages ... and find some little bit of freedom that is left in our country via MMOs.

I haven't seen the documentary, but from what you are saying I am assuming they only say what is happening to these people and how they act. This in my opinion is wrong, if it was productive in any way it would look at WHY MMO's can fill such a role and make people run away from WHAT. And/or what should be done to counter this condition and of course how many people actually are like this, what percentage? Only then it would do something good for society or did they only aim to create a hype?

I Sweden, about a year-and-a-half ago, they had a proper goverment commision to investigate the possible "health hazard" og MMOs. One of the professors (a fairly young professor) did the only proper way to investigate - he started to play WoW seriously for a handful months prior to submitting his report. It was much nuanced on the social skills the MMOs require, the comradaireship, lessons learned from people who cheat.. and all without endagering your Real Life. He also mentioned the "addiction", but any hobby can become overpowering.

I saw his report/presentation on the web as a video but cant find the link - besides it was in Swedish and no subtitles. I havnt seen the documentary CrazyKinux mentions, but it seems this report would be good rejoinder.

I got to see this movie over the weekend. Here are my thoughts about it. Link