Back in April, just over a month ago, I asked you which type of gamer you were: PC, Console, a bit of both, and everything in between. The results I got were pretty much what I expected. Of the 35 of view who took time to vote, a bit more than half (19 - 54%) are PC Gamers, me included in there. About a quarter of you (8 - 23%) are 'More PC Gamers then Console Gamers', and the rest are either equally both (5 - 14%), or more console gamers (2 - 6%). Only one played more console games then pc games. So there you have it.

As for me, as I've stated, I'm a PC Gamer first and foremost, though my XBOX 360 has it's place in my home. I use it mainly use it for first-person shooter such Halo, Gears of War or Ghost Recon. But since the rest of the games I enjoy are either RPG (Neverwinter Nights and Dungeon Siege), RTS (Starcraft, Battle Realms, 1701 A.D. and Homeworld) or MMORPG (EVE Online, GuildWars, Dungeon Runners) I tend to find that the PC is the better platform for those types of games.

I'm always on the look out for new well done EVE sites. They could be corporation or alliance sites, news sites, or reference and utilities sites. But I'm always looking for quality. As many of you know, tons of new EVE sites pop-up here and there, but some go above and beyond the rest and are shining examples of the visually appealing, the informative, and the helpful. Here are 3 of these sites:
The first two are impressive corporation sites, while the last one is a very useful site I came across through EVE's main site. You simply set-up reminders with the amount of time left, and then get an email to remind you, to nag you about it! Skill training completed anyone! Give it a try, I love it!
- May 15, 2007 No comments:

Just finished listening to the latest Live Dev podcast. Quite interesting and funny. Over all, I can say that I'm glad that CCP will be putting more emphasis on the storyline through the White Wolf acquisition. With White Wolf working (oooh 4 "w" in a row, is that spooky or what!) on lore books and all, the future looks promising for us roleplayers and scifi geeks. They plan several books that will expand on the past, current, and future EVE storyline.

Speaking of which, a new chronicle is now available, "Post Morten". A good, though I read better. It'll really be interesting to see what WW can come up with.
- May 14, 2007 No comments:

So following my recent move back to Empire space, I headed to Grinacanne where TAKAGI Corporation has its head office. Having moved out of no-sec space, I had started looking for corporations true to the Gallente Federation goals. Can you really blame me, I mean you can take this girl out of Federation Space, but I've always been, and always be a freedom lover. The Federation is my true home and TAKAGI felt like a nice place to work after being involved with Phoenix Labs for so long.

So after going through the normal channel, I finally got an appointment with one of the TAKAGI recruiter, a fellow by the name of Lareck Kceral, whose actually responsible for the defense section of the corporation. A really nice guy, and after going through some questioning and paper work, I got a 1 month internship program with them.

So I headed back to the apartment I had rented when I got in station, what the locals call "un trou", a whole that is. A few days later, I got an offer; the standard for Gallente corporations. So after going through the usual retinal scan to accept the offer, I headed over to the local bar, and got myself drunk. I was starting the next day and wanted to celebrate!

That was yesterday, and I can still taste the Grinacanne Ice Wine. Expensive stuff, but damn good! So tonight I'm heading off on a mission for a Federal Navy agent, on behalf of the corp. Something about getting our standings up in order to increase our business opportunity with the Navy.

The first thing I did when I arrived back in the Federation was to get myself a new Gallente Myrmidon after reading about it in the last EON issue I had made plans to get one for myself. The above screen shot was taken on my way back. I'll be posting some additional information on the set-up I've chosen after some research. I'll actually make a list to the various ship set-up I've used and mentioned.
- May 14, 2007 2 comments: 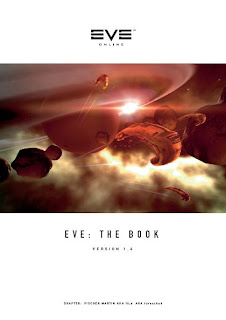 I've always wanted to compile all the EVE Online chronicles into one document, one book that I could read at my leisure and not necessarily in front of a monitor, but wherever I chose.

Well, not only was I not the only one, but I was also late by a couple of month with my 'bright idea'.

Back on the EVE Backstory page are links to two versions of this same book - one with a black background, the other (for printing purposes) in white.

I've download both and will have the white-themed one printed and bounded in full colour tomorrow morning when I get downtown.


I can't wait to flip through it and read it on the commute back home. I just wished we had more of these great books, and can't wait for Tony Gonzales' novel or the RPG books on EVE from CCP White Wolf! 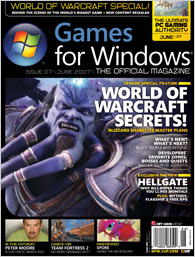 Just finished reading the latest issue of Games for Windows (June 2007) and I must say, I'm still very much impressed with the quality of the content, the articles, artwork and reviews.

The four articles that I enjoyed in this month's issue (well actually next month's, since we're not even in June yet...) were "GFW Live", "Inside Blizzard: World of Warcraft" and the Spore and Mythos preview.

And even though I don't play WoW, I was still very much interested in the story behind it's phenomenal success. I'd be first in line to buy a book on the subject. Something along the lines of "Dungeons & Dreamers: From Geek to Chic", a book I thoroughly enjoyed reading.

As for the two preview, I can't wait to start building organisms and see them evolve in Spore - it's just to bad EA delayed the game until 2008. And I've signed-up for the next Mythos' Beta testing phase. This last one looks like a lot of fun, with some heavy flashbacks to my days of Diablo 2 and carpel tunnel syndrome episodes (thank god for Myoflex).
- May 08, 2007 No comments:

A galaxy of possibilities...

Why do we play EVE in the first place? And why do we keep playing? The next 2 videos make an effort to explain to the non-capsuleer crowd why that is. The first one is from SenorPez, the second from jviper2323.

I spent the better part of the day updating the various of sites on my blog. The Blogroll, EVE Online News, Reference, Tools & Guides, Screenshots, Corporations and Alliances section have all had additional links added and old broken ones removed.

I've added a bunch after reading through my last issue of EON, those I found in the EON Awards nomination article. Most I already add, but some good new ones I was surprised to find.

If you know of good sites that are not listed here, then please let me know so that I may add them. I try to keep up, and only list sites that get updated regularly. So unless the site is well done and current, I might not list it here. Otherwise, please leave me a comment with the site url.
- May 06, 2007 2 comments:

Saying goodbye to Khanid and getting back home

As you read this, I'm on my way back to Gallente Federation space. Though I have not officialy left Phoenix Propulsion Labs, I've cleaned out my hangars, sold what I need and could and packed what I could. On my way back out for a last trip, just as I was leaving the station in Badivefi I got podded by a gang of 6 pilots from PURE Legion, who were sitting there and not only lost a Dominix, but its full cargo! They'll pay one day, you can mark my words. Oh they'll pay.

I just hate waking up in a new clone. It's just so akward and disorienting to wake-up in those clone labs. But ehm who am I kidding, I'd rather feel nauseated then be dead. I just never got used to it. So I boought a shuttle and undocked. I was going to see if these PURE suckers were fast enough on the trigger. As my shuttle exited the station, I hit the engines full speed and as soon as I was clear I engaged the auto-pilot. They never had a chance to target me! But when I got at the gate, a little Pure party was waiting to say goodbye. This time they locked on me, and started bombarding me hard. Not hard enough though. And by the time I jumped, I had only lost shields and half my armor. These bozos couldn't even get a shuttle for crying out loud. "Les pourris!!" as grandpa used to say.

So now, I've got about twenty-something jumps left to get to Grinacanne, on the edge of the Federation. Dad's gonna be happy to see me! I've already dropped my Vexor and all that it could carry. So I just have to get myself there in one piece.

Khanid was fun, and PPL was a great place to work. But home is home, and you can't take the Gallente out of this girl. See you on the other side!
- May 05, 2007 No comments: Congratulations to CCP for a job well done! You've proven that a well done scifi MMORPG has its place in the gaming world. You've created a universe more than a game, and you've allowed its occupants prosper and enjoy a freedom rarely seen in the MMO landscape.

Though this may be a bit old, I still thought that you'd want to see it. I was blown away wen I saw the video. There's no date as to when CCP will be releasing this amazing feature in-game, but the wait will be worth it. The video was filmed as part of a Ten Ton Hammer interview with Magnus Bergsson, CCP's CMO. It's full of interesting (though somewhat outdated) information. To some of you this won't be news, for the others, enjoy.

Tomorrow at fmx in Stuttgart Germany, Torfi Frans Ólafsson, Technical Producer at CCP, will be speaking on this very subject: "From space ships to avatars: Adding full-body Characters to EVE Online". I wish I could get my hands on his speech or a video of his presentation. If you happen to have additional information, please feel free to post a comment and share it. Here's and excerpt on his presentation"


"Torfi will talk about the development of a hybrid motion capture and procedural character animation system being built for an upcoming EVE Online expansion, currently in development. The system will allow its players to socialize inside stations using high resolution full-body avatars."