"When Worlds Collide" - DUST 514 makes the cover of EDGE Magazine 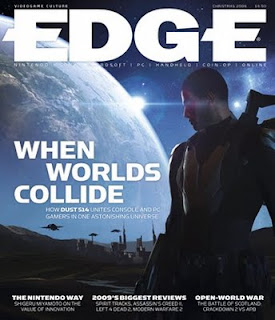 The latest issue of EDGE Magazine has the upcoming DUST 514 FPS as its cover feature.
I'll be honest, when I first looked at that cover I thought I was looking at Sheppard from Mass Effect. It took a few seconds and a few words to realize I was looking at a character from DUST 514. So is this the look of what to expect when Incarna (aka Ambulation, aka Walking in Station) rolls out, hopefully by the end of next year?
Anyways, getting back to EDGE, here's some more details on the cover feature:

Subscribers are about to receive their shiny copies of the latest issue of Edge, featuring the debut of Eve Online maker CCP's FPS Dust 514. In shops on November 24.
Though Eve itself is firmly based in Iceland, Dust 514, which is set in Eve's universe, is developed by CCP's new Shanghai studio. A MMOG shooter, Dust's battlefields are absolutely tied to Eve, with Eve players' corporations hiring Dust players to fight for control of planets for them.
In other words, instead of the matchmaking being handled by heartless servers, Dust 514's action will be defined by Eve's players. And who better to try such a fascinating experiment than CCP? It is the developer which, in Eve, produced the most fascinating MMOG culture in the world.

Have you disclosed that you got a free copy of DUST 514 and play EVE Online for free yet?

http://disclosurepolicy.org, you should read it. You are such a marketing tool!

Well at least we agree on something; I wish I did have a free copy of DUST 514 already!

Mr Anonymous, you've got a wonderful sense of humour!

I am also sure you would share that copy with me if you had one right? =P