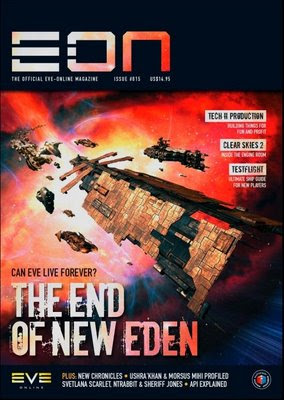 I'm was usually pretty quick to post the EON table of content when I got my issues in the past. Unfortunately I was still very much taken away by Real Life's responsibilities when I got the 15th issue of our beloved magazine.
Once I got it though, I was quickly caught-up in the richness of this latest issue. It's got some great articles ranging from Finnigan's Quaterly Alliance Report, to the Clear Skies II interview, to the brilliant and no less scary "The End?" essay on the possible Big Crunch of New Eden. And lets not forget the chronicles, the "Beginner Ships" article, and much more.
All in all, an issue that everyone who's put an effort into, should be proud of! When anyone in the press cries wolf saying that Print media is on the verge of implosion, I look at my issues of EON and shake my head.
Good work Zapatero! Great results guys!
Table of Content - EON 015
- May 20, 2009

glad to see you 'back in action' bro!

ARG I STILL HAVEN'T GOTTEN MINE!!!

Tony, I'd start contacting MMMPublishing at this point if you're still waiting.