I recently had the opportunity to attend, for the first time, the Montreal International Game Summit, which was held on November 8th and 9th, right here in Montreal. Now for those of you who may not know about this Canadian metropolis, you might want to keep this town on your radar. It's a little known fact that this city has become in recent years the sixth-largest games developer hot spot in the world. With over 7,000 developers, most major studios have an office in town (Ubisoft, EA, THQ, Funcom, WB Games, Bioware, Eidos and many others.

And so it was with great excitement that I spent those two days as a Media Partner, having thus a chance to mingle with local developers, producers, artists and heads of studios. The summit started off with a brilliant keynote by Ed Fries who talked about the evolution of the art form of video games, and how the industry needed to break out of the various molds and limitations it had established as it had evolved, and embrace the notion of constraints and limitations (see this Gamasutra article for further reading).

And then I was off the races, trying to attend every and all the sessions that were of interest to me. That is, far to many of them! Suffice to say that if I could have split myself up a number of times, I would have had a chance to see them all. But as it stood, I had to make a few tough choices. Some of the highlights for me were  Todd Northcutt's on Leaderboards, Veronica Zammitto on Game User Research and Rui Manuel Cassais on Tech Development and MMOs.

At the end of the 2 day summit I had attended maybe two thirds of the session I had originally wanted to see, not for a lack of interest, but of time. You see, despite the fact that I use this blog as an outlet for my passion as a gamer and a geek, this blog, and the podcasts I've done (or am starting again) are just part of a hobby, an interest that I have.

Despite this, and the fact that though I tend to gravitate in and around the Montreal Game Development Community despite not being part of it, I'm starting to know a lot of folks that work in this amazing industry. And low and behold, a good chunk of them were at the summit! As such, I spent a good time catching up with old friends and getting to know new faces.

In the end, that's a lot of what this summit is about: sharing knowledge, growing your network, and looking for new opportunities. And in that senses this last edition of MIGS was a great success!

I can't wait for next year!

1873. Arizona Territory. A stranger (Craig) with no memory of his past stumbles into the hard desert town of Absolution. The only hint to his history is a mysterious shackle that encircles one wrist. What he discovers is that the people of Absolution don't welcome strangers, and nobody makes a move on its streets unless ordered to do so by the iron-fisted Colonel Dolarhyde (Ford). It's a town that lives in fear.

But Absolution is about to experience fear it can scarcely comprehend as the desolate city is attacked by marauders from the sky. Screaming down with breathtaking velocity and blinding lights to abduct the helpless one by one, these monsters challenge everything the residents have ever known.

Now, the stranger they rejected is their only hope for salvation. As this gunslinger slowly starts to remember who he is and where he's been, he realizes he holds a secret that could give the town a fighting chance against the alien force. With the help of the elusive traveler Ella (Olivia Wilde), he pulls together a posse comprised of former opponents-townsfolk, Dolarhyde and his boys, outlaws and Apache warriors-all in danger of annihilation. United against a common enemy, they will prepare for an epic showdown for survival.

Speedlinking for the week-end of November 27th, 2010

Those of you who have been long time readers, know that I use to have this regular series of post called the Speedlinks, where I would provide a list of posts, articles and videos related to EVE Online in some way or another, or in some cases, not at all.

I'm happy to tell you that the series is back, thanks to the ease with which Google Chrome allows me to track and collect these bookmarks over the last week. So without further ado, and in no particular order, here are those links:

As I head out to see Monsters with friends, I'm obligated to share this trailer from another upcoming science fiction film that looks damn right amazing!  You'll appreciate!

Friday Video: I'm about to have a Geek Orgasm! Seriously!

Just when I thought TRON trailers couldn't out do themselves, but they've just done so. Watch and witness this orgasmic experience!

We may already be in November - and the 10th at that! - but October's EVE Blog Banter was held back on October 26th and quite a few of you participated. Unfortunately I didn't not. Elements that were out of my control prevented me from participating this time, though not from lack of interest.

So here is the list of those who participated in this last Blog Banter, as well as the topic:


Welcome to the twenty-second installment of the EVE Blog Banter, the monthly EVE Online blogging extravaganza created by CrazyKinux. The EVE Blog Banter involves an enthusiastic group of gaming bloggers, a common topic within the realm of EVE Online, and a week or so to post articles pertaining to the said topic. The resulting articles can either be short or quite extensive, either funny or dead serious, but are always a great fun to read! Any questions about the EVE Blog Banter should be directed to crazykinux@gmail.com. Check for other EVE Blog Banter articles at the bottom of this post!


This month topic is brought to us by L'Dene Bean of Nitpickin's who asks: Why, and how did you pick your corporation? Is your loyalty solid or just until a better placed organization "recruits" you. The shorter version:  Who holds your Unshakable Fealty and why?

The New Eden Chronicles Co-Host Contest: We have Winners!

Maeve and I were very excited by the number of great entries we got, as well as their originality, and though we're a few days late in announcing our EVE Podcast Co-Host Contest results, we're happy to tell you that we've got 2 winners to announce!

After going through all the mp3 clips, picking just one winner proved to be an impossible task. We can tell you without a doubt that there's enough talent out there for many more EVE podcasts! Getting back to ours though, we ended up narrowing it down to "2" co-hosts, who will be joining Maeve and I as part of the New Eden Chronicles crew, a podcast dedicated to the EVE Community itself. So here they are,

Congratulations to the both of you!

The new podcast, New Eden Chronicles, as I mentioned, will tend to focus on the EVE Community and the amazing talent found within it. We'll cover EVE Online blogs, the EVE Blog Banters and what not, other podcasters, the artists and musicians within the community, as well as the game itself of course. Maeve and I are still working out the details and look forward to discussing this with our 2 new co-hosts in the next few days.
For the time being, we've set up a Gmail account - NewEdenChronicles@Gmail.com - for you to send in your requests and suggestions. We're also working on other ways for you to communicate with us and will let you know about those as they become available.
We look forward to your feedback and hope to have our first podcast out within the next 2 weeks!
So stay tuned, and in the mean time, please join Maeve and I in welcoming Memoocan and Ardwulf to the New Eden Chronicles cast!
Fly safe!
- November 10, 2010 5 comments:

With CCP Game's 7th iteration of the EVE Fanfest - thanks to Mandrill for the heads-up by the way - the most famous party at the top of the world moves from an early Fall schedule to early Spring. As most of you know, I had the opportunity to attend Fanfest V (Fall 2008) and had a blast! The experience is like no other in the world. This is the time where we capsuleers get to mingle, chat, interact and party with CCP Devs. This is also a time, where friends and foes get to finally meet face to face, share a few laughs, as well as a few drinks - ok, a LOT of drinks!

I look very much forward to this particular Fanfest, and hope to meeting with a great number of you who will also make the annual capsuleer migration to the land of Vikings and rotten shark! Since my last Fanfest over 2 years ago, the EVE Blog Community has grown quite considerably, and I've had the chance to virtually meet with quite a number of people whom I consider good friends today. During this Fanfest, I really hope that we'll get to meet with some of you and put a real face behind your avatar.

I think that @Mandrill's initiative to organize a tweet-up is a great idea, one that will surely be successful. Just tell me when and where, and I'll be there!

As my first day of the Montreal International Game Summit ends, I'm about to head back to downtown Montreal for the MIGS Party, courtesy of Visceral Games Montreal, formerly known as EA Montreal. This is my first attendance at MIGS and hopefully not the last. Coming out of the first day, I can already tell you that I'm very impressed with venue, the speakers and with the overall conference itself.

Since I need to leave for the event, I don't have time to tell you about the various sessions I attended earlier today, but I can tell you that Ed Fries' opening keynote surprised quite a few people, that GameSpy's Todd Northcutt sessions on leaderboards was very interesting, and that Funcom's CTO, Rui Manuel Casais, session on the Technical Challenges of Developing MMOGs was very interesting and full of real-life experiences. More on that later!

Now if you don't mind, this is where I'm heading tonight: 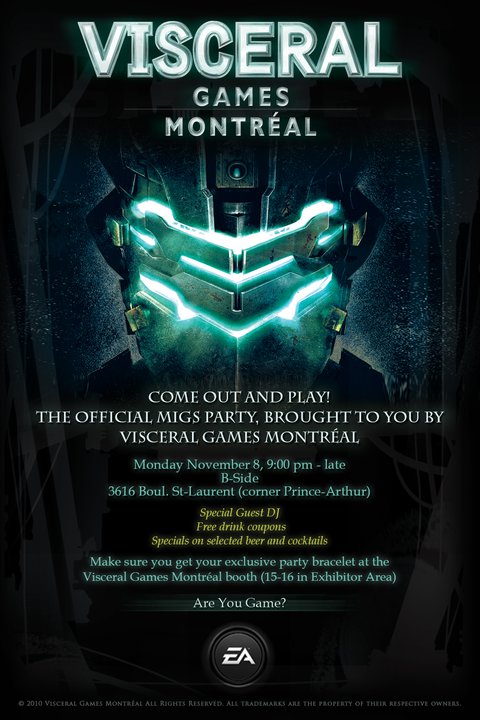 I don't own an iPhone, but if this game and others like it start coming out, I might be tempted to get one!

I'm still at it! So I may not post as often nor as much as I used to in the past, but I'm still here. I first started blogging over 5 and a half years ago - February 2005 - and the sporadic posts slowly became more regular, of greater length, and hopefully quality. Later the Blog Pack was born, as did the EVE Blog Banter - which reminds me that I still need to post October's Banter!

Over those last fifty-some months, this blog has seen a lot of activity. Here is some of those stats as of today:

And so, I write this post not to brag, but to thank you for being here, for reading this blog, for commenting, and for help this old blogger keep his edge. Even he seems to be losing it these days. I could not have done it without you guys!
Fly safe, and be proud of the Community we've build!
- November 04, 2010 8 comments: