Last night at Hurley's, a bunch of strangers met with a common passion, EVE Online. We arrived strangers and left with smiles, knowing that we would have to do this again. Though the turnout was not as high as I would've like, still, for those who were there it was a blast. We had a few pints of Guinness and Kilkenny, a few good laughs and a lot of war and ship setup mishaps stories! 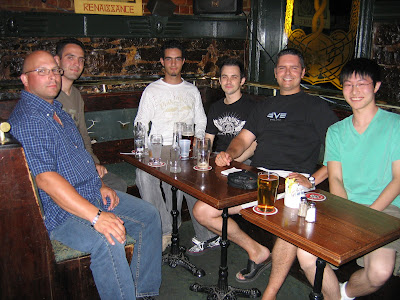 Pictured above (from left to right) are Sinjin, Sine Tamar, Alexis Aristide, Pandore, Treenara Mazouk (that's me) and Phreacker. And I guess you can tell by the look on our faces, we had fun and the pints they were flowing nicely. So the guys have asked me to setup the next meeting, which I plan to do soon. As soon that is as when they get me a few good PvP ship setups for my Vexor, Myrmidon and Dominix! Now we're talking!

I am moving to St.Eustache on the 20th. Count me in for the next meet!

Glad to hear we can count you in for the next one!

Its obvious whos the pirate!! The small guy looks evil compared to the other carebears... Can i get 1m isk now?

An what's your characters name? By the way if this is Pandore, I will a contract on your head to get my money back!! =)

Sounds good to me!! Of course, its pandore