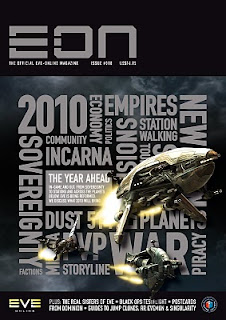 I'm usually pretty quick to post the Table of Contest of the current issue of EON whenever I get them. But somehow, this one slipped through and when I saw that some of us had received issue #019, I was ecstatic, went in to check the EON ToC listing I've put together, only to realize issue #018 was still missing!

This is even more surprising since the 3 lead articles in that particular issue are some of the best writing I've seen so far in EON. You see, all 3 were written by good friends of mine, @Mynxee's "Sisters of EVE", @Zptr's "2010" and @Nyphur's "Combat Evolving". As well as articles by @KirithKodachi and @RocWieler.

For those of you already subscribed, or who've had the chance to flip through one of its issues during Fanfest, you know that EON stands out as one magazine above the rest. While other print publications facing extinction, EON leads the way as an MMO-specific gaming magazine, where members of the community can participate in its creative process!


PAST FORWARD
For the last couple of months all people have been talking about is sovereignty. Sov this. Sov that. Sov the other. Being such an important part of EVE that’s understandable, which is why we’ve devoted much of this issue to this very emotive subject. From a detailed look back at how conquest mechanics have shaped New Eden, to our regular look at the ongoing wars out in 0.0, we go one further and ponder the future of EVE in 2010, starting with the fallout from the Dominion release all the way to what we might see in the expansions over the coming months.

THE REAL SISTERS
It’s been rumoured that females play EVE. Not just pretend ones with female avatars who sound weird on TeamSpeak, but real ones who can do something called ‘multitasking’. Mynxee is one such creature and she’s made it her mission to seek out others of her species to find out what it is about EVE that appeals to them and what their experiences of EVE are like. Meanwhile, two of CCP’s most testosterone-free Devs reveal themselves in the latest series of In Crowd articles.

STAR GUIDES
Even if we do say so ourselves, the role-playing guide in this issue is particularly excellent. Why? Because it cuts to the very essence of what role-playing is and prepares you for a deeper and more satisfying EVE experience, as do our other three guides; to EVEmon, Singularity and jump clones.

FREE POSTER
It seems you guys loved the Caldari Cruisers poster we gave away with issue #016, so we’ve decided to do another one! This time (while stocks last) subscribers will receive a massive 841mm x 594mm wall chart showing all the Amarr Cruiser hulls (Tech I, Tech II and Faction) and how they relate to one another, so that you can spot the cosmetic and functional differences between the common Augoror and the Navy Issue variant with a simple glance. ‘Show Info’ has become a thing of the past, thanks once again to paper technology!

PLUS
New Chronicle: ‘Things Can Only Get better’
Profiles of LFA and Wildly Inappropriate
Postcards from Dominion
Black Ops battleships get the Testflight treatment
Istvaan Shogaatsu and Grr go In Character
All the latest news, and more...